Why are we now losing another tree to insect attack in the West?

Cone collecting may be a hobby for some, but it is serious business for the U.S. Forest Service. 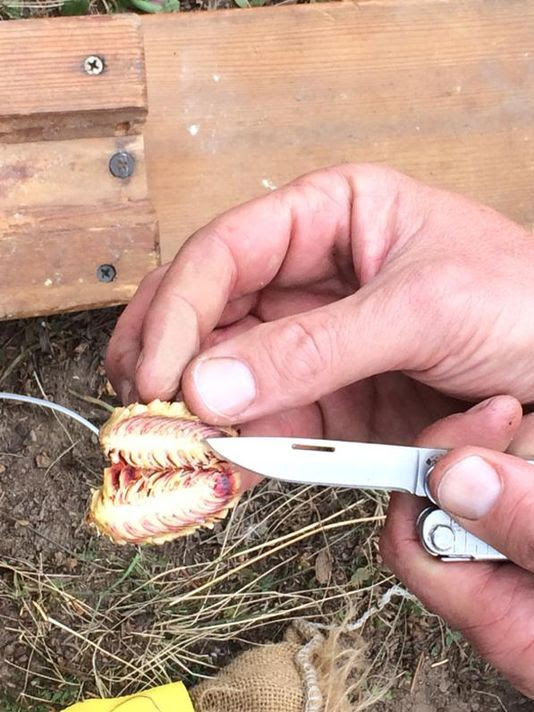 (Photo: Maya Rodriguez, KUSA)
35 CONNECT 2 TWEETLINKEDINCOMMENTEMAILMORE
NEAR MARSHALL PASS, CO – Within the San Isabel Forest, at just about 10,000 feet, Robert Beauchamp is adding on a few dozen more.
"These trees are a little wispy up top, so you feel movement a lot," he said.
Beauchamp is a professional cone collector. He scales trees of all heights to collect the cones containing precious seeds -- seeds of trees that are now in peril.
"If they are open cones, you don't want them. The seed has already been dispersed," Beauchamp said. "The cones you want are closed, or just starting to push apart."
It's all part of an effort by the U.S. Forest Service to protect Engelmann Spruce Trees, which are now under siege in Colorado from the spruce beetle. Part of the San Isabel National Forest is on the leading edge of the spruce beetle outbreak and foresters said that outbreak is heading north within Colorado.
Those beetles already killed off trees across millions of acres in the state. The U.S. Forest Service says it is the largest outbreak of them ever recorded.
"Almost all of the mature spruce trees, probably within sight of where we are standing, within one to two years, they'll all be dead," said Alex Rudney, who is with the U.S. Forest Service, based at the Salida Ranger District. "A lot of these trees have been infested this year. They'll start next fall and into winter, turn yellow, to brown, to gray -- and the needles will fall off."
That makes collecting seeds from the still living trees so crucial. They're collecting 40 bushels of cones; each bushel contains about 1,200 cones. It sounds like a lot, but not all of the seeds will make it into seedlings, which are needed to preserve the genetic diversity of Engelmann spruce and the forest.
"Trees are like people – they're different," Rudney said. "Each tree has a certain amount of real specific genetic information, that's maybe different than trees from other areas."
Back up in the tree, Robert Beauchamp knows the fruits of his labor today, may not be fully realized until decades from now.
"We're helping keeping the forests going," he said.
Once they are done with the collection, the cones will be taken to the U.S. Forest Service nursery in Nebraska. The seeds will be stored and some will be used to create new seedlings, which can be planted within one to two years.
Posted by Jim McGannon, d.b.a. Jim McGannon, Forestry/Landscape Consultant, LLC forestermcgannon@gmail.com, 303-526-1118 at 7:49 AM No comments:

WHY ARE THE LEAVES FALLING?

"concentrate on enjoying the NOW...don't live in the past or future. However, planning ahead and learning from the past, is WISE..."
- me

You Cannot Manage What You Don't Measure...

"When a trout chooses to prey upon what he thinks is weaker than himself, the angler ought not to be blamed for it.
- George Washington Bethune (1847)

"The hunter is the arch type of freedom. His well-being rests in no man's hands save his own." - Theodore Roosevelt, 1896

When the Going Gets Tough...

NATURE IS ALL WE'VE GOT:

We are never outside of it, and our lives depend on it!
William Cronon, 1999

Fall in the Flat Tops

One of my favorite pics, Fall 2011 Colorado

Taking Care of the Home

bald eagle in her nest, Colorado

woodpecker after insects under bark

elk in the meadows of the foothills

I had a visitor in April 09